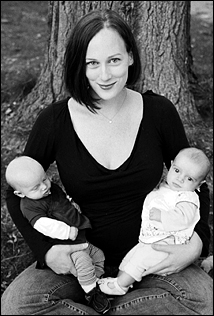 A few months ago I was working with a pregnant woman and asked her to pay attention to the following things after her baby was born: trouble with nursing, colic, crankiness and turning the head more to one side.  These were all signs that her baby may need to come in for a chiropractic adjustment.

This patient remembered what I said because she called me one month after her son’s birth, due to nursing difficulties.  He was nursing well in the hospital but once he got home he was having trouble nursing on her left side. The mom was a little nervous about getting her baby adjusted.  Since she had recently come in for care I explained that my touch would be much lighter.  I also had a very gentle adjusting instrument to work on areas that needed help.

The next morning she arrived with her newborn son and his older sister.  They had just come from the pediatrician’s office and torticollis was ruled out.  During our visit the mom said that when she pumped the left side did not produce as much milk as the right. I could see she had an older daughter so I asked if this was the case with her first child and she said no. Her daughter nursed beautifully on both sides. I said that since she nursed equally the first time, it was probably the baby’s nursing issues that prevented the left side from making as much milk.  We certainly would know more once he started to nurse more equally.

I used my gentle adjusting instrument on those areas to help release the restrictions and then lay him on his back to check his neck.  Immediately, I felt that the right side of his neck was much tighter and restricted so I used the instrument on that side.  He was pretty fussy the entire time I was adjusting him so after wards I handed him to his mom and asked her to feed him on the left side.

The mom could feel he was nursing differently immediately.  I explained that would make sense as often adults or older children get off the table and can tell me they feel instantly better.  The improved nursing was her baby’s way of saying the same.  I also explained that his fussiness during the adjustment was his way of telling me that I had found some sore spots.  My older patients get to verbalize that to me all the time, babies verbalize by crying.

I asked her to come back in again to make sure he was still nursing equally.  On his second visit she said he was a different baby.  He was nursing equally on both sides, was sleeping a lot better and was back to his same happy self.

This is not the first baby that I have had the pleasure of helping ease nursing problems.  My purpose in sharing this story is to spread the word that babies need to be checked for “kinks” in their neck as a cause for nursing issues.  A lot more moms and babies could go through a lot less frustration with this care.